What was the word you ask? The word that hounded me for a year was the word risk. It showed up in quotes like, “A ship in harbor is safe, but that is not what ships are built for.” And in a Scripture that showed up again and again, Matthew 25:31-46, or best known as the Parable of the Talents. In the Message, verses 28-29 are translated this way, “Take the thousand and give it to the one who risked the most. And get rid of this “play-it-safe” who won’t go out on a limb.”

You see in 2007 my wife had just given birth to our daughter Trinity, my son was 4 years old, and I was a full-time Pastor of Youth and Nurture in an established church. My wife did some substitute teaching on my day off, but by in large I was the primary provider for my family. And here was God, right in the middle of that, calling me to risk. And I knew throughout that year of 2008 what that risk was. It was to leave my secure ministry position, my being paid on the denominational scale, and to step out into the unknown of starting a new community of faith. No guarantees of a paycheck. No guarantee that this new community of faith would survive. No guarantees that it wouldn’t fail. That I wouldn’t fail. No guarantees other than the call of God on our lives, and the dream in our hearts.

And so ten years ago, my wife and I stepped into the unknown of planting a new faith
community. And in the last ten years, we have seen God do some amazing things in and through our lives. We have seen time and time again how God provides. We have seen God show up in the lives of others because of that risk. But that word risk still continues to haunt us. Risk stillshow s up in many different areas. In the midst of risk showing up in all of these places, God also shows up and asks one simple, but difficult question: Do you trust me?”

This risk to plant a new community of faith hasn’t been without struggles, and trials. Over the last ten years we have been ghosted by many people, we have sent many friends to other places throughout the country and the world (with our blessing), we haven’t grown numerically as much as I would like, and I have questioned God, my calling and my ability to lead this new community of faith. And so just because God calls you to risk, doesn’t mean that the leap into it will be smooth sailing.

When that word showed up in 2008 I also had to wrestle something else to the ground, the idea of failure. What if the church didn’t survive? And was it a failure if I took the risk? Failure was definitely a possibility. But I have learned in the last ten years that the greater failure would have been if I hadn’t done anything at all. Failure would have been not trusting God’s call to risk. Failure would have been to, in the words of Matthew 25, playing it safe. I didn’t want my epithet on my tombstone to bear the words, “He played it safe.” 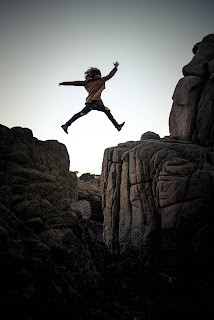 Let me close this blog with a quote that I drew strength and encouragement from many times throughout the last ten years and praying that it gives you encouragement and strength to take that risk. It comes from an unlikely source, the 26th President of the United States, Theodore Roosevelt. Roosevelt says this about risk, "“It is not the critic who counts; not the man who points out how the strong man stumbles, or where the doer of deeds could have done them better. The credit belongs to the man who is actually in the arena, whose face is marred by dust and sweat and blood; who strives valiantly; who errs, who comes short again and again, because there is no effort without error and shortcoming; but who does actually strive to do the deeds; who knows great enthusiasms, the great devotions; who spends himself in a worthy cause; who at the best knows in the end the triumph of high achievement, and who at the worst, if he fails, at least fails while daring greatly, so that his place shall never be with those cold and timid souls who neither know victory nor defeat.”

Popular posts from this blog

May 21, 2019
“I’d like to pick your brain on how to minister to others in grief,” he said between bites of Indonesian Rendang. The young minister had known his own grief, but as with many of us with shepherd’s hearts, he felt compelled to do something to help those in his flock who were struggling. He’s not alone.      Because of my work with bereaved families, I’m often asked questions like this. Extended family and co-workers contact me asking why their loved one or co-worker can’t just let it go and move on. Some express concern for their loved one’s well-being because they continue to experience grief long after their loss. William Shakespeare said, “Everyone can master a grief but he that has it.” John Irving wrote, “When someone you love dies… you don’t lose her all at once; you lose her in pieces over a long time — the way the mail stops coming, and her scent fades from the pillows and even from the clothes in her closet and drawers. Gradually, you accumulate the parts of her that are go…
Post a Comment
Read more

October 24, 2019
Earlier this week John MacArthur, profound Christian theologian and pastor had some words to speak on women in ministry. When asked about the role of women, specifically Beth Moore, he was very blunt with his comments. (You can find an article about the exchange here.)
Let me be clear, I believe any person, and any church has the right to be faithful to their belief systems. I know that there are many Christians who do not affirm the gifts and ministry abilities of women- MacArthur among them. There are many churches that would never consider calling a woman minister- and I believe that is their right and they should have the ability to stay faithful to that interpretation of the Bible because there is Scriptural rationale to stand in that belief- even if it is not one that I support. However, I also believe that MacArthur took things too far, and allowed his personal belief systems to harm women- especially those in ministry.
To insult, degrade, or damage another Christian, especially…
Post a Comment
Read more

How to make spiritual practices connect to youth- By Gabe Dodd

May 01, 2019
It is no secret that spiritual practices help people connect to God.  It is also not a secret that young people crave spirituality.  Just take a look at the Netflix new hit show, Tidying Up with Marie Kondo.  In the show, Marie, a non-anxious presence enters cluttered American homes and brings a calming spirit to help them experience, “joy” by helping them simplify.  Melinneals and Generation X are drawn to stillness and connection because it is a break from the constant bombarding marketing strategies and busy schedules that the world imposes.  In the book, The Spiritual Child,  Miller incorporates clinical experience with research to show how healthy spirituality is a core component of sound mental health and human flourishing.  She says that a spiritual yearning is a natural instinct, and the earlier they learn spiritual practices, the more likely they are to “practice spirituality” as an adult.  So the question for churches must be to connect our young people to God in avenues tha…
Post a Comment
Read more